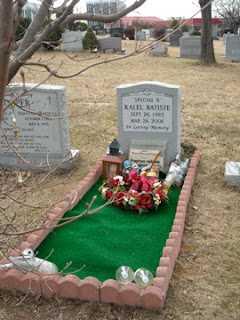 May he never be forgotten.
Posted by Greta Koehl at 8:04 AM 1 comment:

91 years after Thomas D. Costello was killed in the Bois de Bonvaux, France during World War I, his remains were finally laid to rest in Arlington National Cemetery.

After perishing from German artillery fire, Costello was buried in nearby woods, with a cross to mark his grave.

A search was carried out for several years following the war, but officials were unable to locate his body. According to the records kept on the case, the investigation was finally suspended in 1932. Many years later, relic hunters found his remains as well as those of several other soldiers in eastern France.

Based on dental records (sent to Costello’s sister after the war), evidence of a fatal head wound, and some artifacts found at the discovery site, including a rosary, French coin, and remnants of uniforms, the Defense Department’s Joint POW/MIA Accounting Command was able to make an identification.

This is the point at which the story takes a turn that should thrill genealogists: It was through a “Pentagon genealogist” (someone who works at the Pentagon who is a genealogist or a professional genealogist who works for the Joint POW/MIA Accounting Command?) that Pentagon officials were able to contact a family descendant (apparently Costello’s great-great nephew), Michael J. Frisbie. Frisbie was honored to fly in from Maine with his family in order to attend the funeral of a fallen soldier. And so, 91 years after his death, Costello received a soldier’s funeral.
Posted by Greta Koehl at 5:02 PM No comments:

Discovery of gravestones in stream at Arlington National Cemetery

As I was driving to work this morning, I heard a story on the news about some old gravestones being discovered in a stream bed at Arlington National Cemetery. At least one of the stones had a name on it, but the name is not being released. At some point the Cemetery had adopted the practice of removing names from discarded grave stones, grinding the stones up, and sending them to a recycling center. It is not clear whether the recently found stones predate that policy. Apparently the new policy was put in place when it was discovered that some people would remove the stones to be used in their own yards. The stones may have been used to shore up the stream.

More information on this story and previous revelations of incorrect burials and mislabeled headstones can be found here.
Posted by Greta Koehl at 6:02 PM No comments:

Unbelievable – What Can Be Done?

Incredible … you are not going to believe this … please check out Ruther Coker Burks’ Graveyard Rabbit blog, last2cu. She made a shocking find yesterday and has a short deadline for figuring out what to do about what may very well be her great-grandmother’s tomb, left exposed by the lowering of a lake into which a developer had thrown what remained of a family cemetery back during the Depression. If any of you Graveyard Rabbits or others who are knowledgeable about these matters know what Ruth can and should do, please advise her.
Posted by Greta Koehl at 7:38 AM No comments:

Teen’s Christmas Wish Is a Gravestone for his Grandmother

Though we are sometimes tempted to dismiss younger generations as being self-absorbed, there is always evidence to be found supporting the opposite conclusion: there are actually a surprising number of young people who think of others first.

This was the case with 13-year-old Leo Guenette, a 7th grader at J.E. Benson School in Windsor, Ontario. For an assignment to answer the question, “If you had only one wish for Christmas, what would it be?”, the young boy wrote that he would like a gravestone for his grandmother, who died November 9.

To read the full story about how this wish was answered, click here.

It is certainly inspiring and reassuring to read of young people like this as well as our young GeneaBloggers and young Graveyard Rabbits. There will definitely be another generation who will remember their ancestors.
Posted by Greta Koehl at 2:39 PM No comments:

Remains of Union Soldier to Be Buried in New York

A previous blog post, Remains of Union Soldier Found at Antietam Battlefield, dealt with the discovery of the remains of an unidentified Union soldier by a visitor to the Antietam National Battlefield and the steps that were being taken by specialists to identify the remains.

As the team of specialists predicted, no positive identification could be made. Nearly a year after the discovery, however, the remains – consisting of 400 bone fragments, 13 uniform buttons, a U.S. belt buckle, and some scraps of fabric and leather – were taken to New York, the soldier’s home state as indicated by the insignia on the buttons. The remains, along with some soil from the battlefield, were placed in a donated pine coffin by six National Park Service rangers and two Civil War re-enactors in Union uniforms. The coffin was covered by a 34-star U.S. flag. Two Army National Guardsmen and a volunteer motorcycle escort accompanied the remains on the 330-mile trip to the Gerald B. H. Solomon Saratoga National Cemetery, where the burial took place today, the 147th anniversary of the Battle of Antietam, also known as the Battle of Sharpsburg.
Posted by Greta Koehl at 4:19 PM 3 comments:

The photos below were taken at the cemetery of The Falls Church, for which Falls Church, Virginia, was named. According to the historical marker, “This Georgian-style church designed and built in 1767-69 by James Wren, related to Sir Christopher, replacing the 1733 frame structure on 2-acre lot (part of 1729 248-acre Trammel grant). Washington and Mason were vestrymen. After the 1788 disestablishment of the Church of England, fell into disuse until repaired in the 1830s. Union troops used it as a Civil War hospital and stable. Repaired by 1866, an Episcopal congregation has worshipped here since 1873. In 1959, church chancel narthex and galleries were added. Adjacent structures were built in 1952 and 1992. Church gravestones date to 1803.”

The “repair” referred to as having taken place in 1866 was necessary due to the fact that the church had been vandalized by Federal troops; a picture of the damaged church can be seen here. 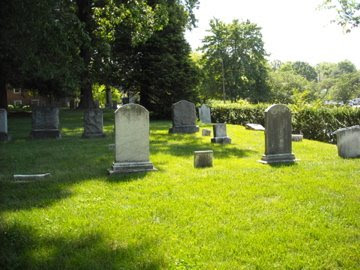 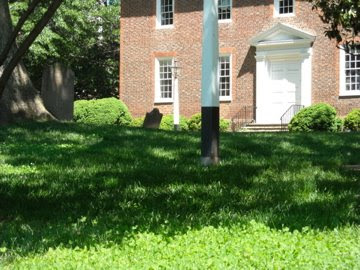 During the cold and overcast winter months here in Falls Church, I decided I would postpone photographing the graves in the cemetery until the sunnier summer months. This was actually not the best course to have followed, as I found out when I returned on the sunny day on which these photographs were taken. In the summer large trees keep most of the tombstones in the shade for most of the day. You can see that some of these are in the sun, but unfortunately I paused to speak with one of the church members and within perhaps 15-20 minutes storm clouds quickly moved in and eliminated the possibility of further photography. I can either return in the summer during the brief part of the day during which these tombstones are in the sun or postpone all further photography until the winter, when the trees have lost their leaves. The best-laid plans....
Posted by Greta Koehl at 11:05 AM No comments:

This Blog Is Devoted to All Things Graveyard: Exploration, Preservation, Restoration, and Education